HomeMurderYoung lady stabbed to death by her ex-Chinese lover
Murder

Young lady stabbed to death by her ex-Chinese lover 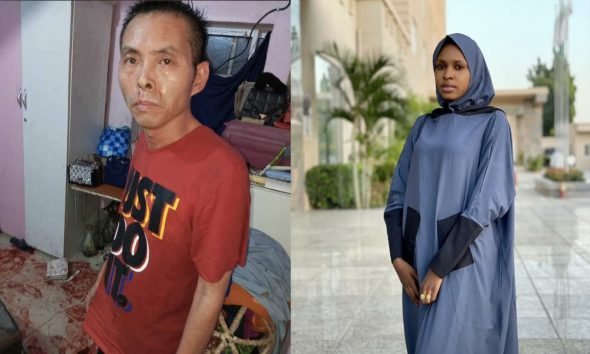 A 23-year-old lady, identified as Ummu Kulsum Sani Buhari, has been killed by her Chinese ex-boyfriend in Kano.

The Chinese national, simply identified as Geng allegedly stabbed the victim to death on Friday night  at Kuntau residence in the Janbullo area of Dorayi in Kumbotso Local Government.

NigeriaCrime.com understands that Geng gained entrance into the residence by jumping over the fence, and then sneaked into his victim’s room.

According to sources, the duo had a relationship  for about two years before she settled for another man in Kano

Unfortunately, when her marriage with the other man crashed, she returned to her family’s home.

Geng, who was yet to get over the heartbreak of being dumped, learnt  Ummita was back and tracked her down to her house where he allegedly stabbed her to death.

Reacting to the incident, Public Relations Officer, Kano Police Command, SP Abdullahi Haruna-Kiyawa said the report of the preliminary investigation would be made public soon.

Ummita’s body was buried around 11 am on Saturday, with family, relatives, friends, and mourners in attendance.

Meanwhile, Geng is in the custody of the Police Criminal Investigation Department (CID) after operatives saved him from mob prosecution.

How suspected motorcycle thief was murdered by neighbours