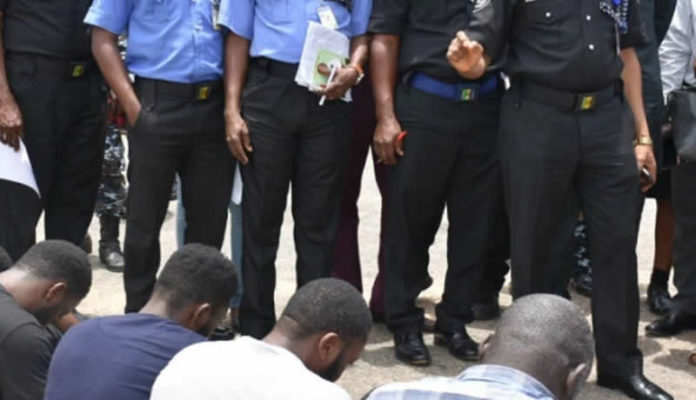 Angry youths in Ibaka Mbo Local Government Area of Akwa Ibom State have arrested four men suspected to be officials of the state transport ministry for allegedly extorting cash from unsuspecting fishermen in the area.

It was learnt that the suspects, who operated under a fictitious name, were arrested last week and handed over to the Nigerian Navy who later moved them to the police station in Enwang, Mbo LGA for investigation b for investigation by the security authority.

The arrest was confirmed by a Human Rights lawyer, who doubles as the counsel for the fishermen in Ibaka, Barrister Oluwajuwon Ogunbiyi, on Monday.

Ogunbiyi, in a statement he issued in Uyo, the state capital lamented that the the suspects carry out their nefarious trade by disguising as security agents under the name ‘Government of Akwa Ibom State (Marine Safety, Security, Revenue Surveillance and Enforcement on Water ways/ Water Fronts)’.

He said they have used this tactic to dupe several fishermen in the state.

The lawyer alleged that the state government have failed to tackle insecurity in the riverine areas but instead encourage the breakdown of law and order by employing thugs to “ilegally tax poor fishermen” in the state.

Ogunbiyi added that the the state governor, Udom Emmanuel, has ignored all cries for him to end the growing insecurity in the riverine communities.

He said, “Four men who disguised themselves like security agents and claimed to be engaged by the Ministry of Transport of Akwa Ibom State were apprehended by youths of Ibaka community in Mbo L.G.A where they have been extorting fishermen in the area.

“The suspects were handed over by the youths to the Nigerian Navy who eventually handed them over to Nigeria Police at Enwang.

“The Government of Akwa Ibom State is encouraging the break down of law and order by employing touts, renegades, and unscrupulous elements in a bid to illegally tax poor fishermen who are currently battling with the terrors being unleashed on them everyday by sea pirates at the sea.

“The Governor has failed to address the issue of insecurity along Akwa Ibom waterways despite all entreaties to him. It is just as if the people have been left to bear the brunt of this malaise alone.”

When contacted, the Police Public Relations Officer of the Akwa Ibom State Command, Odiko Macdon, said he was yet to be briefed on the development, adding however that he would make inquiry from Monday (today) on the matter.