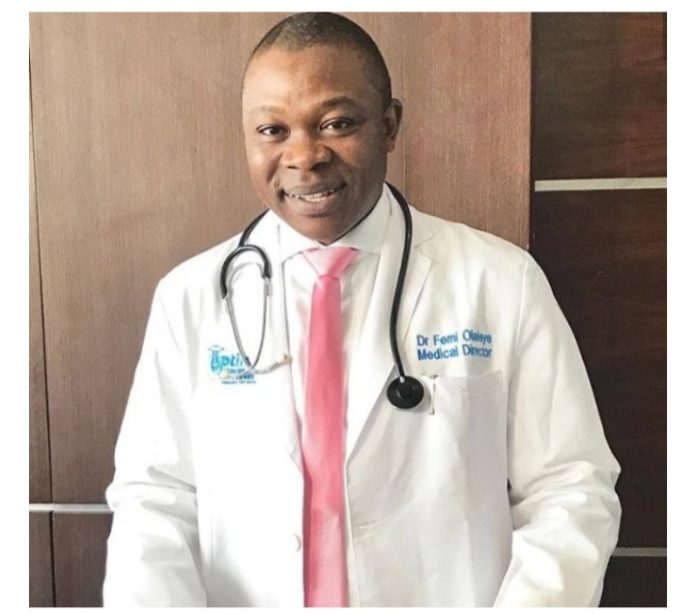 The absence of 57-year-old medical director, Dr Olufemi Olaleye of Optimal Cancer Care Foundation for arraignment in court has been stalled on Monday.

Olaleye was charged by the Lagos State Government in Suit ID/202896/2022 for alleged defilement of a 15-year-old-minor. But the trial could not take place on Monday due to his absence.

Justice Ramon Oshodi of the Sexual Offences and Domestic Violence Court in Ikeja has now adjourned the matter till Wednesday, November 30, 2022.

Addressing the court, the State Prosecutor, Olugbenga Alagbe, informed the court that the matter was for trial.

Alagbe explained that a letter was sent to the defendant and that it was duly acknowledged which could be regarded as Exhibit A.

Alagbe added, “We equally sent a letter to the complainant and Investigating Police Officer.

Addressing the judge, the counsel to the suspect, Mr Babatunde Ogala, SAN, explained why his client is not in court.

“The defendant is out of town and his lawyers have not been served. They should give us three clear days.”

He insisted that service has not been done, “the learned silk added “ It is true a letter was also sent to Mr Olusegun Fabunmi.

The prosecutor asked that a bench warrant should be served in view of the circumstance.

Ogala, countered his submission, “So asking for a bench warrant for a man who has neither jumped bail or refused to appear, he is not running anywhere, if he was in Lagos, he will be here.”

“We ask for a date for arraignment to be done. Even when there is no service but we are here on his behalf.”

The defence counsel also informed the court that he intends to serve the prosecution a summons for bail.

Alagbe replied that if we get the summon on Friday, we will respond by Monday.

However, Justice Oshodi adjourned till November, 30, 2022.

It will be recalled that Olaleye was accused of raping the minor who was living with him and his wife at their residence in the state, after the girl’s father died.

NigeriaCrime.com learned that the doctor allegedly deflowered the minor after introducing her to pornography. He was also accused of perpetrating the crime for about 19 months until the wife discovered and reported the matter to the Lagos State Police Command for investigation

The policemen detailed to investigate the case reportedly arrested Olaleye and the case was transferred to the Gender Unit of the police command, where an Investigative Police Officer, Bimbo Williams, was assigned to handle the case from March 2022.

As proper sanctioning of the suspect was not forthcoming, it was learnt that a petition was written to the Lagos State Domestic and Sexual Violence Response Agency to intervene in the matter. The agency forwarded the case file to the Directorate of Public Prosecution and recommended Olaleye for trial.

In the last eight months, several child rights advocacy groups and celebrities have repeatedly called on the police to arraign Olaleye.