HomeMurderKidnappers involved in the murder of NSCDC officer arrested
Murder

Kidnappers involved in the murder of NSCDC officer arrested 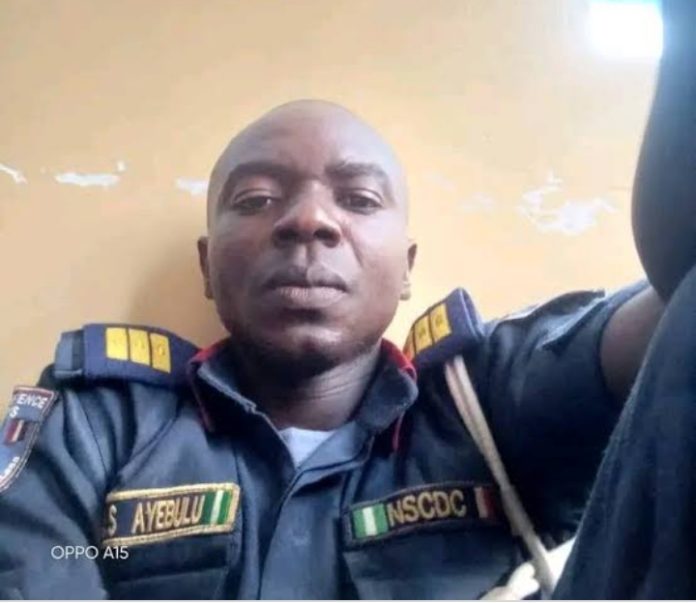 Four kidnappers who allegedly killed an operative of the Nigerian Security and Civil Defence Corps(NSCDC), Segun Ayebulu last week, have been arrested.

The suspects were arrested on Tuesday by local hunters who were patrolling the border area between Ekiti and Kwara.

It will be recalled that the kidnappers who shot the operative along Oke-Ako/Irele road and also abducted three members of the deceased’s family, collected a sum of N5 million ransom before they were let off the hook.

NigeriaCrime.com learned that the vehicle conveying the dead operative and his family, was waylaid while travelling to his hometown at Ogbe, Yagba West Local Government area of Kogi State at about 6.30 pm on Saturday, September 3, 2022, and rained bullets on them.

The chairman of Ajoni Local Council Development Area of Ekiti State, Mr Micheal Ogungbemi, who confirmed to journalists in Ado Ekiti, on Tuesday that the suspects were arrested by Ajoni Local Security Network codenamed Operation Eradicating Bandits at the Borders of Rural Ajoni Communities(EBBORAC).

He said the local security operatives arrested the culprits while patrolling the border area between Ekiti and Kwara Tuesday evening.

He said: “They had confessed to having perpetrated the killing of the NSCDC operative and kidnapping of his family members.

“If not for the prompt action I took, they would have been mobbed by angry youth.

“Recovered from them were two AK47s. Immediately after the arrest, my office was contacted and I instantly informed the team from Amotekun Corps, Ikole Command, Officers of the Divisional Police Officer, Ikole LGA for immediate detention, investigation and prosecution of the culprits.

“They are presently being detained at the police station in Ikole Ekiti”.

The Commander, Ekiti State Amotekun Corps, Brig Gen. Joe Komolafe confirmed the arrest of the four suspects. Akomolafe said: “Yes, they are now with the police. The local security network worked with our operatives in arresting the suspected killers and kidnappers.

“Since the incident happened, our men have not rested. We have been combing the surrounding bushes at the border area. We are sounding a warning to criminals that Ekiti is not in any way safe for them”.