A Prince from Abioye Ruling House, Prince Adeniyi Abubarkah has disclosed that the reason why the dethroned Mr. Taiwo Rasaq Adegboye refuses to obey the judgement of the Court of Appeal sitting in Akure that sacked him from the stool of Alawo, was because he is the unrepentant members of the ruling All Progressive Congress (APC) in Osun State.

Prince Abubarkah gave the hint by stating alleging that the leadership of the party in the State and Governor Gboyega Oyetola led State Government had told Adegboye not to respect the judgement of the Court of Appeal because they were in control of Government and they could do anything they like.

Abubarkah,who is a Crown Prince from Abioye Ruling House/Compound, Awo in Egbedore Local Government,area of the State, maintained that the judgement of the Court of Appeal,Akure that dethroned Taiwo Adegboye as new Alawo, was very straight forward and unambiguous by ordering Taiwo Adegboye to stop parading himself as Alawo in and outside the State. 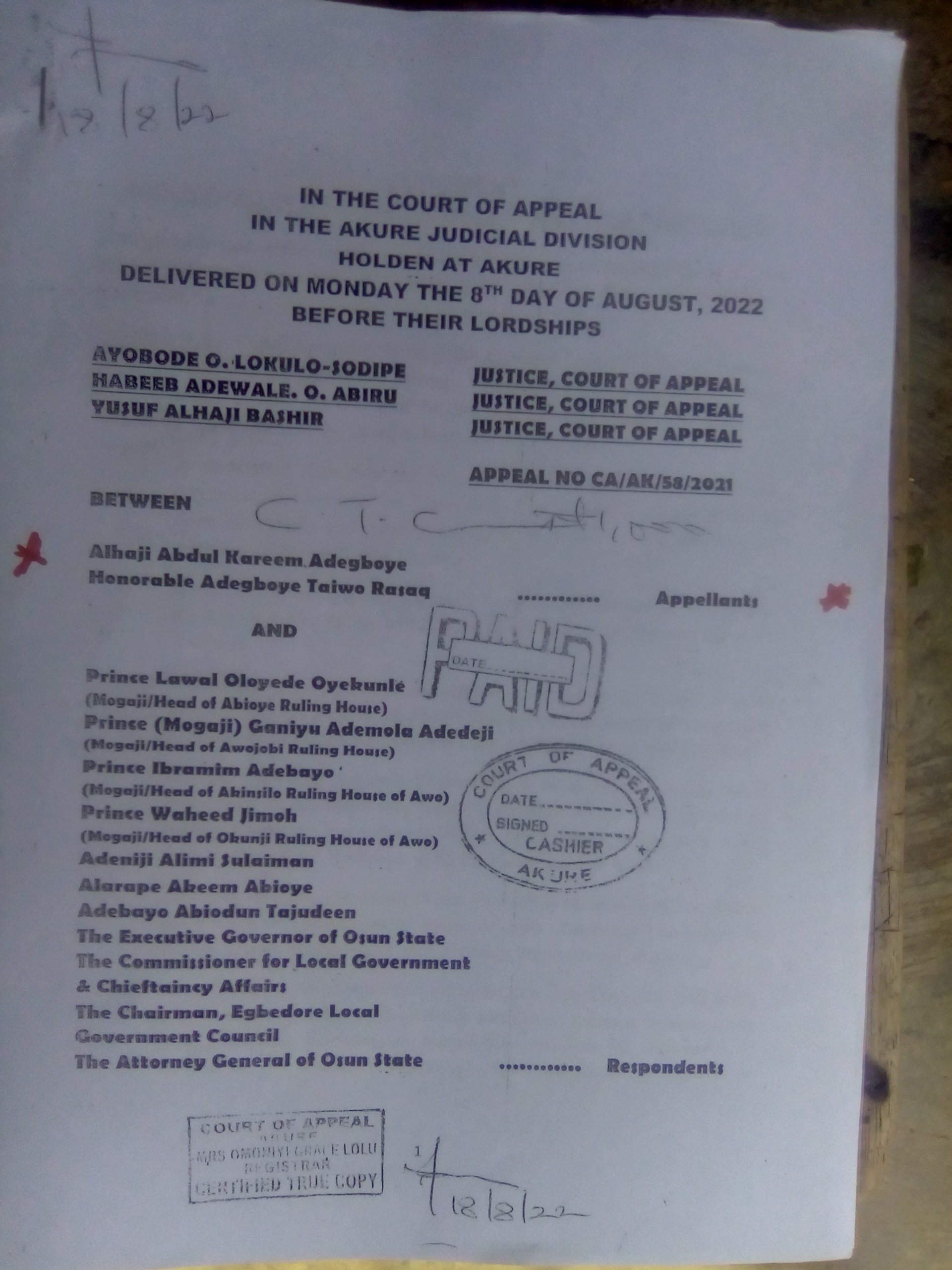 Speaking further on continuing poking finger into the eyes of the law by disobeying the Appeal Court judgement by his younger brother ( Taiwo Adegboye), Abubakar stated that Adegboye was disobeying the Court judgement with his own volition and not in the interest of the entire members of Abioye Ruling House/Compound, Awo, insisting that other members of Abioye Ruling House/Compound,Awo,were law abiding citizens and respecters of the rule of law.

Blaming Governor Gboyega Oyetola and the authority of the Nigeria Police Force(NPF) for allowing Taiwo Adegboye to continue disobeying the Court of Appeal judgement delivered on August 8th, 2022 by Hon. Justice Habeeb Adewale Abiru and concurred by the two other Judges of the Appellate Court including; Hon. Justice Ayobode Lokulo-Sodipe and Hon. Justice Yusuf Alhaji Bashiru. 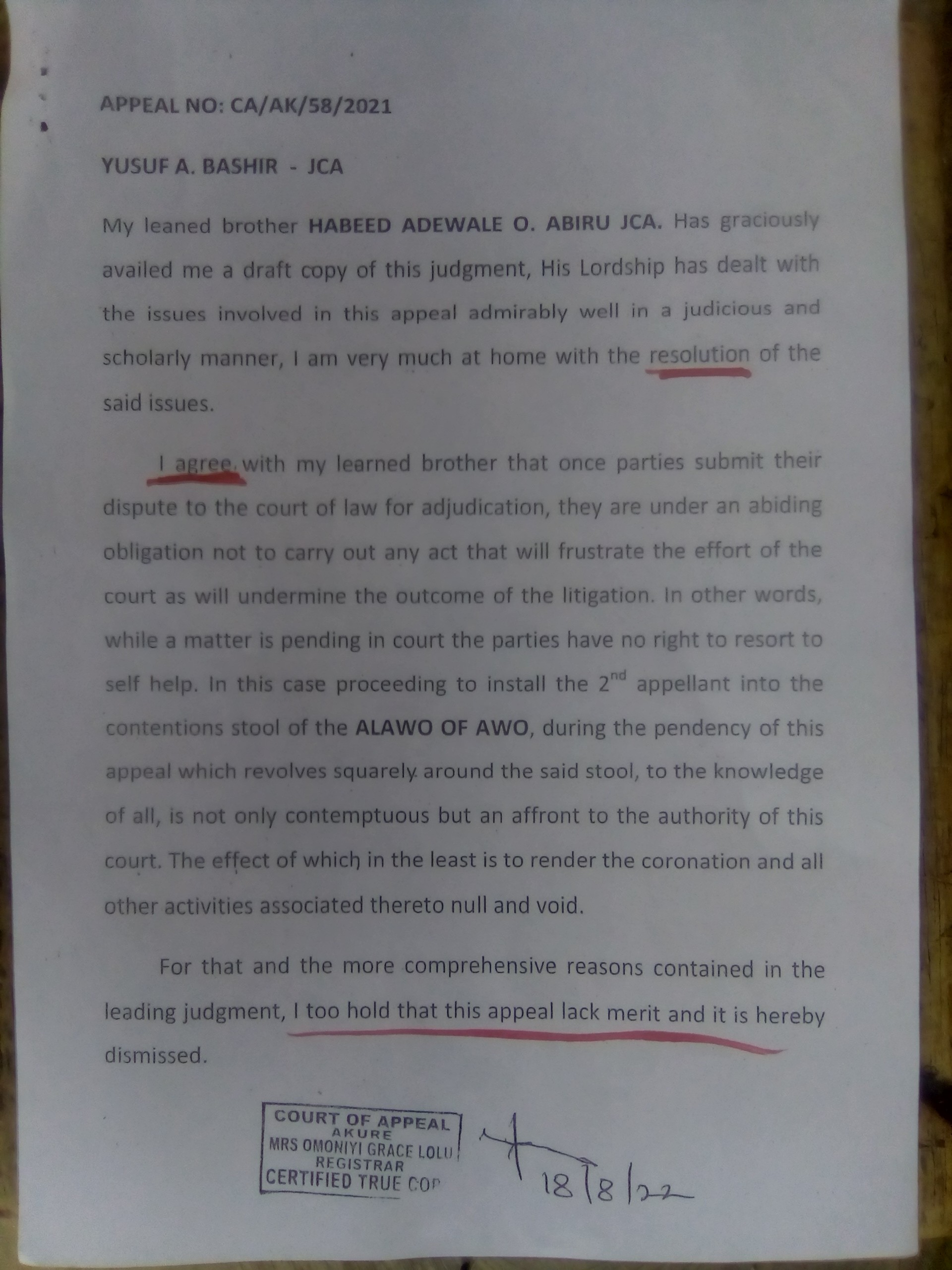 On planning by Taiwo Adegboye to confer honorary chieftaincy on few unsuspected members of the community this week,was tantamount to contempt of the Appellate Court and liable to imprisonment, urging those slated for this illegality to stay clear of becoming contemnor.

Quoting the part of Appeal Court judgement with appeal N0: CA/AK/58/2021, ” The Court further orders as follows: i. An order is hereby made setting aside the selection, the appointment,the approval and the installation of the second Appellant, Honourable Adegboye Taiwo Rasaq,as the Alawo of Awo, some of which acts were carried out by the eighth to the eleventh Respondents, and they were carried out after this appeal had been entered on the 25th of June,2021 and was pending before this Court and the second Appellant is directed to vacate the stool forthwith. 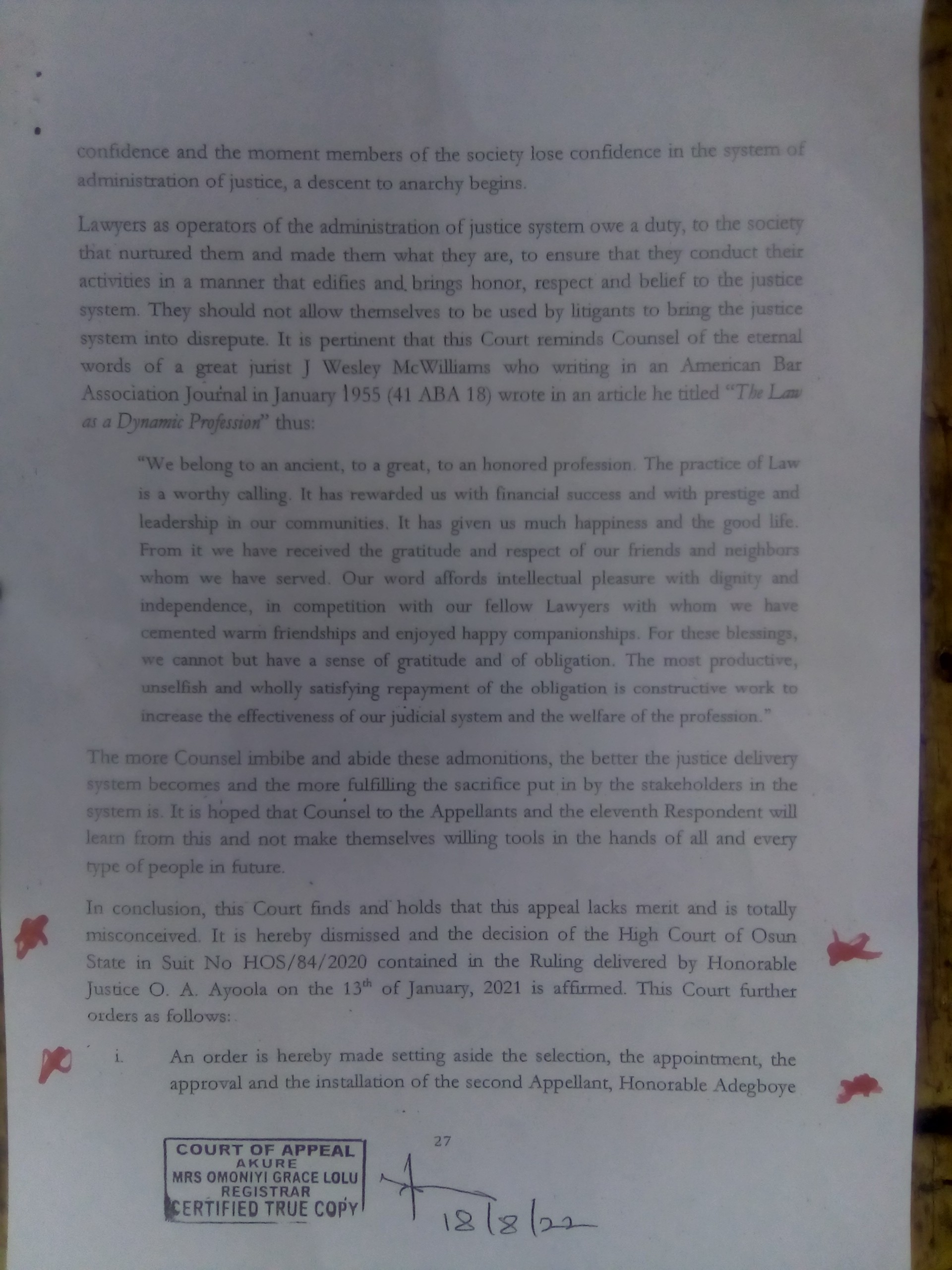 “ii. The second Appellant, Honourable Adegboye Taiwo Rasaq,is hereby restrained from parading himself as or performing any of the functions of the Alawo of Awo or wearing or displaying any insignia of the office of Alawo of Awo, including beads,crowns and all other paraphernalia of the stool pending the final determination of this action by the lower Court.”

“In other words,while a matter is pending in Court,the parties have no right to resort to self help.In this case proceeding to install the 2nd appellant into the contentions stool of the Alawo of Awo, during the pendency of this appeal which revolves squrely around the said stool,to the knowledge of all,is not only contemptuous but an affront to the authority of this Court.The effect of which in the least is to render the coronation and all other activities associated thereto null and void”, Appeal Court submitted. 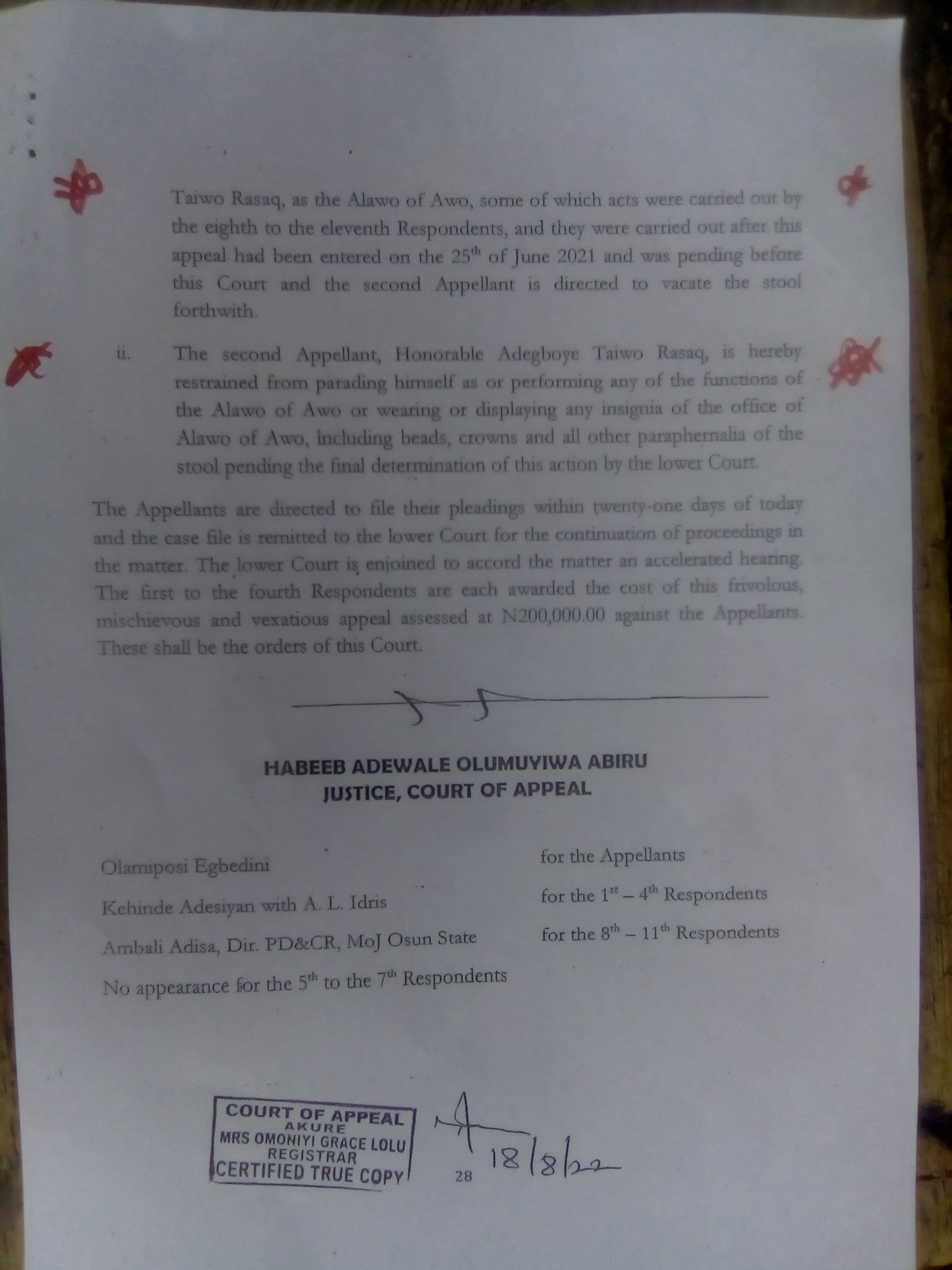 The Appeal Court then awarded cost of sum of Two Hundred Thousand naira (N200,000) against Taiwo Adegboye to be paid to first to fourth Respondents each for bringing frivolous, mischievous and vexation appeal before the Appellate Court in Akure.

Prince Abubakar therefore promised that the Abioye Ruling House/Compound, Awo,under the headship of the Alhaji (Prince) Abdulkareem Adegboye, would soon make the both soft and hard copy of the Appellate Court landmark judgement available to the whole world. 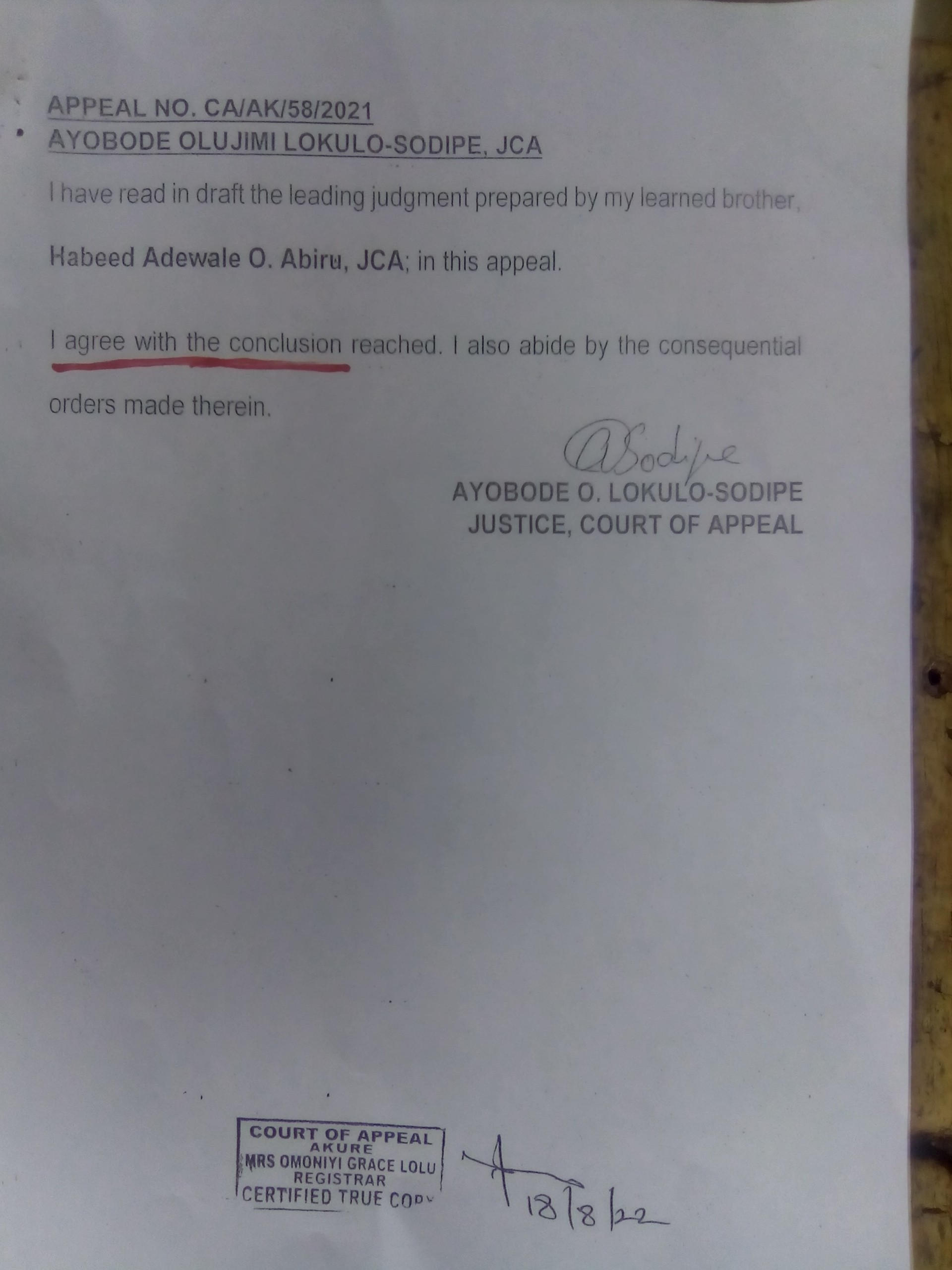