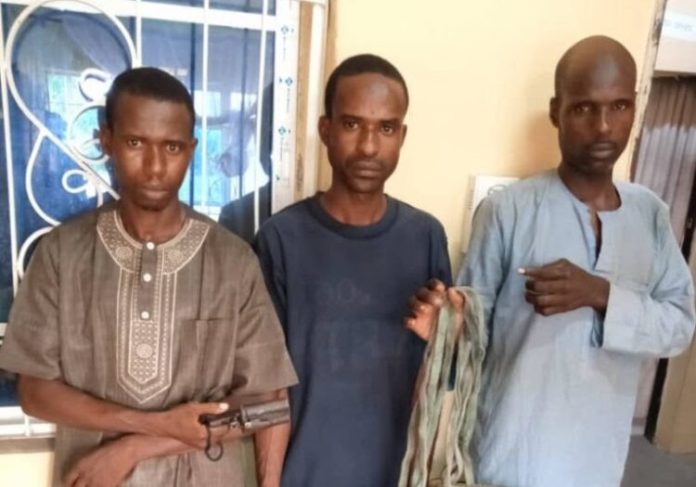 Three hunters has been nabbed by The Adamawa State Command of the Nigeria Police force in connection with the supply of foodstuffs to kidnappers in Fufore and Girei local government areas of the state.

During operation, the police recovered locally made pistol, tvs, motorcycle, food items, mats and ropes used in tying their victims.

The suspects, Auwal Mohammed, 28, Isah Umaru, 40 and Rabiu Mohammed, 19, were arrested following an intelligence report and we’re apprehended on the 9th of June 2022.

According to a statement made by the Police Public Relations Officer Sulieman Yahaya Nguroje the suspect were part of the gang terrorizing Girei, Daware, Pariya villages in Girei and Fufore Local Government Areas.

He said, “all members of the hunters’ association attached to Tambajam and Tsigire villages of Fufore and Song LGAs are collaborators of the nefarious kidnapping activities going on in that axis.”

He expressed his disappointment has the suspects betrayed the trust reposed on them by the communities in protecting lives and property, alleging that they were caught in the unholy act of supplying food items and other basic needs to their fellow kidnappers.

He however extended the commendation of the Commissioner of Police, S. K Akande, to Girei DPO and ordered other Divisional Police Officers, Operational Commanders and their supervisory area commanders to do the same in order to curb security threats.