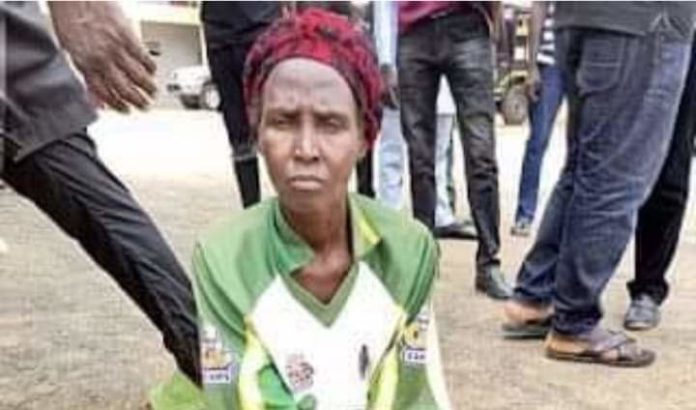 Operatives attached to the Adamawa state police command are currently investigating a 58-year-old housewife in Adamawa State, Hajaratu Sini, for allegedly killing her husband’s lover with a stick after she caught them.

The mother of two Hajaratu who hails from Wumbirmi Tilli, in Michika Local Government Area was paraded alongside 38 other notorious suspects at Adamawa state police command in Yola, on Tuesday, August 9.

NigeriaCrime.com gathered that the suspect Hajaratu who has been married to her husband for over 40 years reportedly murdered her husband’s lover, Kwada Drambi, on July 31 after she discovered that her husband and Kwada Drambi a widow has been dating secretly.

According to neighbours, Hajaratu’s husband and the deceased who is a widow have been secretly seeing themselves.

Unfortunately on July 31, Hajaratu caught them in an uncompromising position at about 9 pm when she stormed the widow’s house and she caught them.

Hajaratu pursued her husband Sini, who ran out of the widow’s room for safety. She caught up with him outside and they continued their fight.

However, in the heat of the rage, Kwada Drambi followed them outside and engaged Hajaratu in a fight in an attempt to defend her lover man.

Hajaratu, who became wild, used a stick in her possession and hit the Kwada Drambi on her head. Causing her to slump immediately and was later confirmed dead after she was rushed to the hospital for treatment.

Parading the suspect, the Commissioner of Police, S.K. Akande, said that Hajaratu will be charged to court soon.