Chrisland School has suspended a 10-year-old female pupil after accusing her of taking part in a truth-or-dare game in Dubai.

Pupils from the elite high school were in Dubai in March to participate in the World School Games between March 10-13, 2022. The school was celebrated for carrying out an impressive display and winning about 34 medals.

In the April 14, 2022, letter to the girl’s parent, seen by Peoples Gazette, authorities at Chrisland School in Victoria Island Garden City told the girl’s father that she took part in “improper behaviour” after playing the truth-or-dare game, describing her as a “major participant.”

“In line with our core values centred on discipline, Chrisland Schools have zero tolerance for any improper behaviour and misconduct,” the school said in a letter signed by its principal Georgia Azike.

The Gazette has withheld the pupil’s name.

The school said other schoolmates who took part in the game had been suspended, adding that the girl and her parents did not cooperate during its investigation.

“Consequently, [name redacted) is hereby placed on indefinite suspension until you as the parents ensure that she is punished, adequately counselled and rehabilitated,” the school said.

The Gazette obtained the letter hours after social media claims about the matter emerged. Friends of the father said a pregnancy test had been conducted and the school initially hushed up the case. A spokesman for Chrisland did not return a request seeking comments about the allegations.

The development came weeks after Sylvester Oromoni died under controversial circumstances at Dowen College, another elite school in Lagos. 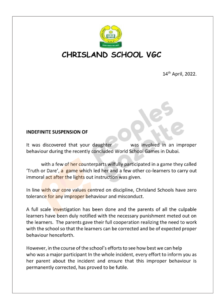 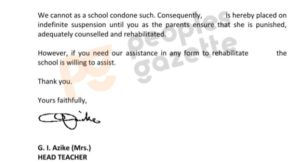 A medical expert on Friday told an Ikeja Domestic Violence and Sexual Offences Court that her findings revealed that the two-year and 11-month old pupil of Chrisland School was raped.

The News Agency of Nigeria (NAN) reports that Oluwatoyin Olayioye was testifying before Justice Sybil Nwaka at the resumed trial of Adegboyega Adenekan, the school supervisor who allegedly raped the child.

The witness, who has been practising medicine for eight years, holds a Bachelors of Medicine, Bachelors of Surgery, a Masters degree of Public Health and is also a trained Forensic Examiner.

Led in evidence by Babajide Boye, the Chief State Counsel, Ms Olayioye, the fifth prosecution witness, said in 2015 to 2016, she was working with the Lagos State University Teaching Hospital (LASUTH) at the Department of Family Medicine.

“I was consulting for the Mirabel Centre when the case was referred to my team from the Ikeja Police Command on Nov. 24, 2016.

“My team was made up of myself, Dr Oyedeji Alagbe and Dr Olujimi Sodipo. The Mirabel Centre had seen over 2,000 clients and I cannot quote verbatim the number of cases involving minors between ages one to five that I have overseen.